Jacquie and I had to put down our cat Chester on Tuesday. He was just under seven months old.

We’d adopted him from the Auckland SPCA back in January. He was about 11 weeks old at the time and the last of his litter to go.

He was in a cage by himself. The volunteers said that he was shy, but he  just kind of seemed confused to me. He wasn’t sure who he could trust.  (Here’s my account of the adoption.)

Chester, about a week after we brought him home.

Jacquie and I argued at first whether to let him outside at such a young age. We decided to keep the cat-door locked for the first few months.

Then he started using the sink as a toilet. Every day I’d go to brush my teeth or wash my face only to find a few bits of pooh in the drain.

We were impressed. Chester had the right room, just the wrong location. Nothing we did encouraged him to use the litter box. So we began to let him out a few hours a day. He was getting big, after all.

He spent a few hours a day poking around outside. Indoors, he tried to be as annoying as possible. He liked to break things, things that the customs officials and cargo handlers of three different countries tried to break but could not, for all their efforts. We lost a lamp and two vases. He was just being a kitten.

When he was small, he needed a lot of stimulation. As he grew older, he found the outdoors much more interesting than playing with us. We didn’t mind him going outside as time went by because size seemed to be on his side. 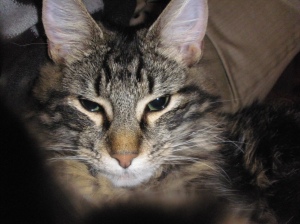 A week or two ago.

Chester liked us. He slept on the pillows between our heads every night and he often took naps on my lap as I wrote at the computer. He got very excited whenever we came home after being out for a while. If he heard the car pulling up in front of the house, he came to meet us. I think he was working on “the long con.” Something to do with getting as much food from us as possible. He had a tremendous appetite, being as young and active as he was.

It rained hard for two straight days last week. But a little weather never stopped Chester from anything.

On Saturday morning, Chester seemed fine. But later, around noon, he didn’t want to have anything to do with us. We thought he might be constipated or suffering some minor illness that would work itself out, Chester being young and healthy.

We went on an overnight trip up north with some friends (more on that in a future post).

When we returned the next day at 11:30 a.m., Chester was waiting for us in front of the house, curled up in the mud. He was in pain and very guarded about his hindquarters. He had limited mobility.

Inside we found a little vomit and what appeared to be a rodent’s tail. We thought that maybe he’d eaten a poisoned mouse or rat.

It was Sunday. I took Chester to the emergency clinic, the Veterinary Specialist Group on Carrington Road.

(I’m not sure how many emergency pet clinics there are in the area, but I highly recommend VSG to pet owners living in Auckland. I also recommend getting pet insurance, but that’s another story).

In the examining room, we could see that Chester’s abdomen and anus were swollen. There was blood around his rectum and under his tail. He had trouble walking when the vet put him on the floor. I was still puzzled by the vomit and rodent’s tail. But the vet ruled out poison. It was becoming clear that Chester had suffered major trauma. An x-ray showed that nothing was broken, but there was his massive swelling and gashes on his leg.

We took Chester to our regular vet, the Auckland Cat Practice, also highly recommended to people around Mt. Eden. (Note: Limited parking. It’s often best to find a spot on Grange Road and walk across the street.)

They did everything they could to alleviate Chester’s pain and to find out what was wrong with him. Chester was apparently leaking urea from a puncture or tear somewhere along his urinary tract. Something or someone had given Chester this serious internal injury. He couldn’t pass urine from his penis due to the swelling. It was flowing into and building up in his leg instead.

The Long and Short of It

We were now looking at a choice. We could put Chester through extensive and costly surgeries to locate and repair the damaged internal tissue while Chester’s pain increased on a daily basis. Or we could euthanize him.

On Tuesday morning we visited Chester for the last time.  Jacquie held him as the vet injected him with the drug.

We spent the rest of the day in the seven stages of grief. But we kept getting the order wrong.

It still troubles us that we don’t know what happened to him. Theories range from a bad fall to an altercation with a dog to human malice. It made us angry to think that somebody might have done something to Chester. But we’ll just never know.

We’re getting over it. Writing about it helps.

In a couple weeks, we plan to go back to the SPCA to adopt another cat.

Bye Chester. You were a cool dude in a loose mood.