History is everywhere. Check your nose. You’ll find some.

That moldy smell in the bathroom? Yep: that’s the rough-draft of history. That milk in the fridge from last January? That’s history in the making.

When it’s put that way, the goal of the historian becomes clear. It’s the same question about humanity that’s plagued everyone from Thucydides down to Barbara Tuchman: What stinks around here?

But history’s great. Really. Who doesn’t love recalling facts about the past?

For instance when my wife reminds me her birthday’s coming up. That’s ancient history come to life. Like a Civil War re-enactment. Or a toga party.

If someone pointed a gun at my head and made me choose between participating in a Civil War re-enactment and a toga party, I’d have to pick the Civil War. But only if I could play a crazy soldier. One who believed he was a Roman general. That way I could be in the Civil War but still wear a toga.

You see? History isn’t always a drag. Like a root canal or a Ken Burns documentary.

Sometimes it’s terrifying. But in a good way. Because you can’t spell terrifying without most of the letters from “terrific.”

Like this terrific place me and the misses went. Whoo boy. Is it historic. 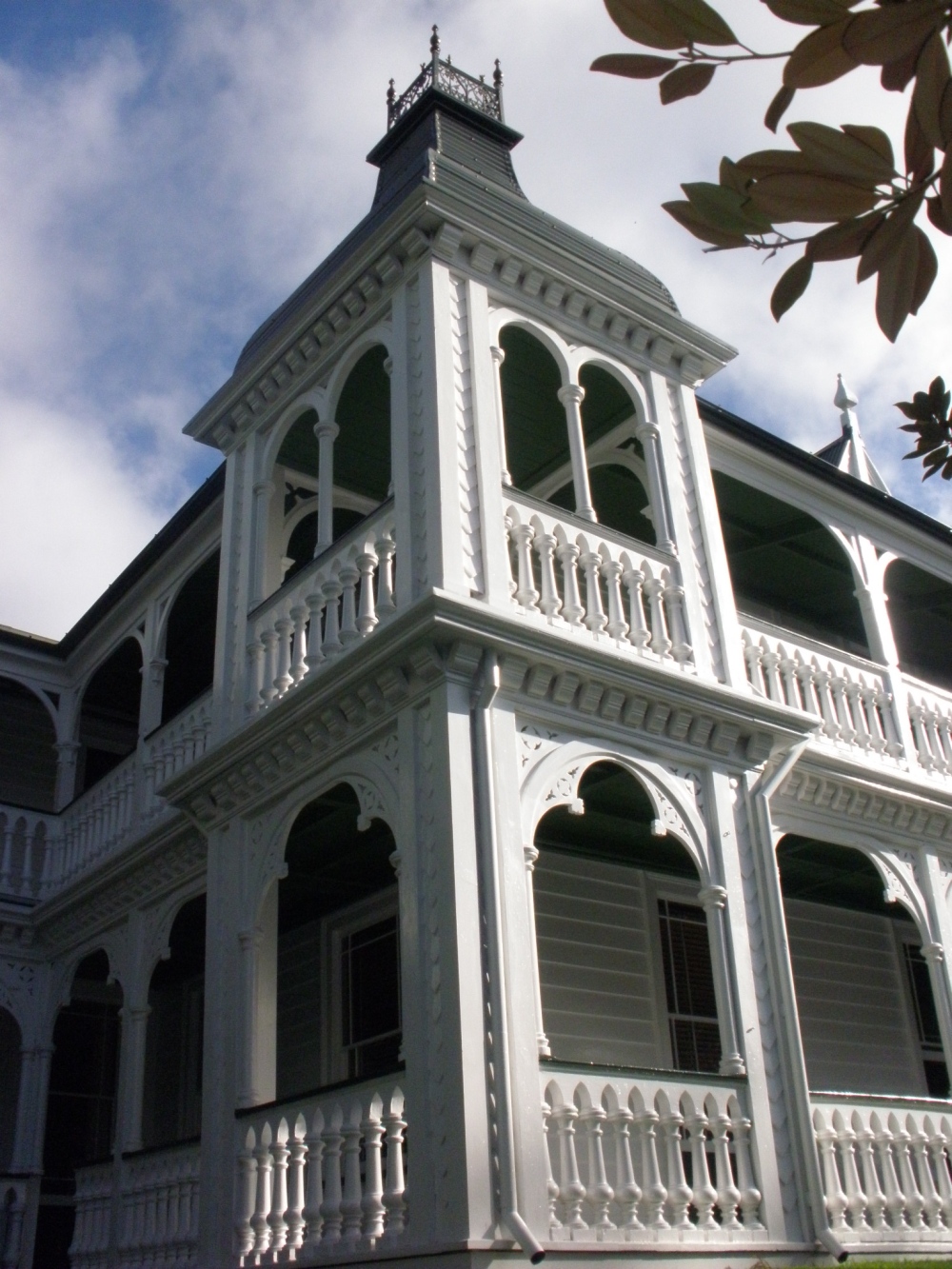 Mr. T spent his youth in India where his father served in the army. His father implored him to put his youth in a mutual fund and not touch it until retirement, but the kid spent his youth anyway. The ogee roof you see in the picture above was influenced by the architecture Mr. T saw in India. At least that's what the hobo living under the verandah told us as we came in. Come to think of it, the hobo was probably Mr. T himself.

Or should it be… 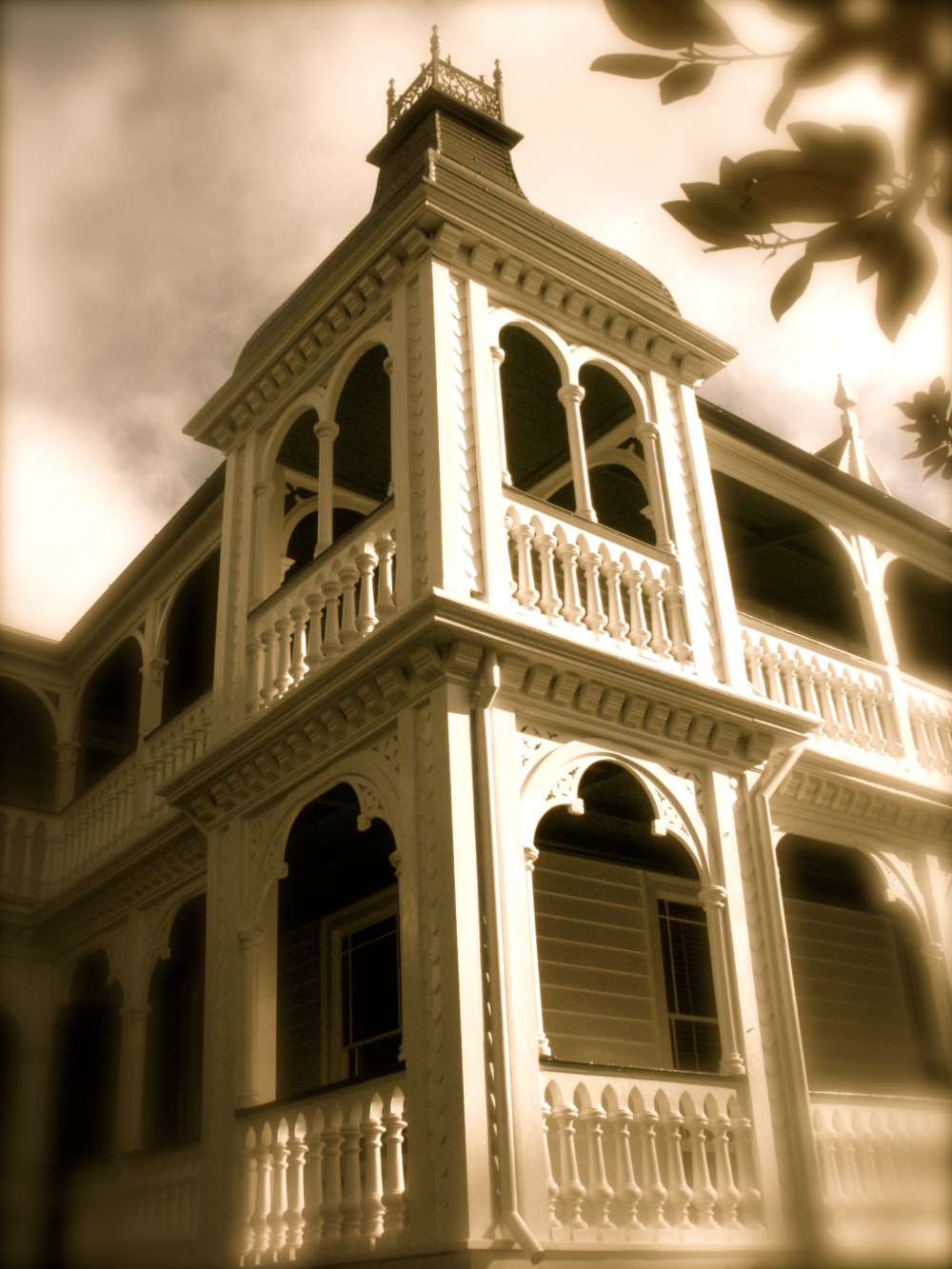 You could almost hear the thunder cracking and the little girl's voice eerily humming a familiar nursery rhyme off-key and with heavy reverb.

Alberton was filled with stuff.

Consequently, some of the floorboards needed replacement.

There was still something for everyone to enjoy.

Like this one innovation straight out of the history of women’s lib.

Windows in the kitchen!

This array of windows is also said to be borrowed from Indian architecture.

Imagine it’s 1865 and there are windows in the kitchen. How about that ladies, huh? That Mrs. T was one lucky broad.

If you stand very still, you can almost see her staring vacantly out one of them, pondering the meaninglessness of her toilsome life. Few women of her time had that luxury.

And if you stand still even longer, you can see her thrashing the scullery maid. Few women had that luxury, either. That’s why every Christmas, Mrs. T loaned her scullery maid out to charity so that people who didn’t have a scullery maid––like scullery maids––could thrash Mrs. T’s scullery maid just to see how the other half lived.

And they say if you stand longer yet, you can see the scullery maid spreading typhoid fever through the family soup.

See if you can spot her in the act:

Just stare for a while.

Alberton is famous for its wall paper. All the wall paper there is original. And some of it is in disrepair.

That was probably intentional. I mean, think about it.

With dentistry the way it was, could you really stomach an hour of Mr. T and family gumming their roast beef?

We came across a well inside a semi-attached shack at the back of the house. Nobody could tell us what it was used for.

Technically, that’s because we didn’t ask anybody.

So I went to the volunteer.

“Look,” I said. “My wife and I don’t want to have to ask questions. It’s our day off. You guys need to designate one person to walk around going up to people saying, ‘Do you realize there’s a well in a semi-attached part of the house at back? Have a look-see.’ That’s all. Is that so hard?”

“I take it you’re from Brisbane,” the volunteer said.

All 17 of Mr. T's children (with two successive wives) were spawned from eggs laid deep in the cool, protected recesses of this well.

Alberton even displays a model of itself, done up in matchsticks.

Or should I say…

You can almost hear the...oh, screw it.

There was a couple from Brisbane touring the place at the same time we were.

They were heading in the same direction, so Jacquie and I had no choice but to follow them and smirk at everything they said.

We came to the bedroom where both Mrs. T’s (Patty and Sophia) gave birth to all 17 or 18 of the children fathered by Mr. T. 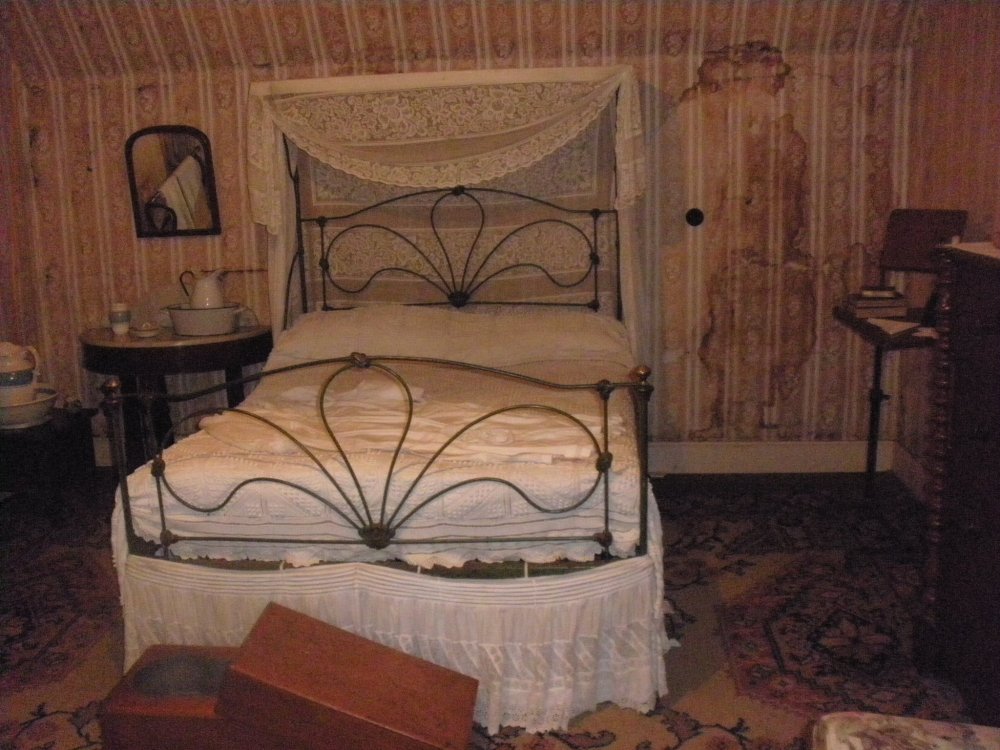 “What’s that awful stain on the wall?” the woman from Brisbane said.

“Amniotic fluid, obviously,” the man said. “From all the children the two wives had over the years.”

“How is that possible?”

“But how did the stain get there?”

“Maybe the bed folds up into the wall. I don’t know.”

Here are some other things we saw…

The nursery. Some visitors got cute.

The maid's room. Setting aside the back-breaking work, the 20-hour days, the stuffy attic room and the annual Christmas thrashing, it really was a sweet gig.

A cool tree. I'm so negligent about identifying trees. This might be a kind of pear tree.

Where Mr. T did most of his thinking. Stinking thinking. And look. It's built like a brick shit house. I always thought that was just an expression.