Last month Jacquie and I received terrible news. We were being evicted. This had never happened to me before. (In New Zealand). We were mortified.

Our landlord dropped the bombshell on us right out of the blue. It arrived by post, like some kind of hate-mail: with the proper amount of postage.

Recognizing the sender, Jacquie opened the apparently innocuous correspondence. She suspected this had to do with the water bill, which we split with the other renters in the building, the family upstairs.

As Jacquie read, her face darkened. She bowed her head and handed the paper to me, solemn, without suggestion of tears, for she was brave and rarely lost composure.

Apparently, our neighbors take issue with our alternative lifestyle.

The letter divided us. Who was at fault? Which of us was more self-indulgent and pleasure-seeking than the other? Which one of us ate a can of baked beans every night for dinner when the other was working a night shift and the one who was at home didn’t know how to do anything in the kitchen but heat stuff up on the stove? Of course it was Jacquie.

We began to look for an apartment. It was bad timing. In several weeks, we were to be visiting the United States and we had already spent a lot of money at the travel agency renting donkeys to take us to the airport on the day of our flight. The money we had left over was meant to purchase a sheep which we would slaughter on board the plane so that we would have something to chew when our ears clogged up due to the pressurization process in the cabin. But now we needed that money for something more important. A place to live.

As we searched for a home, we decided to list the three things both of us wanted. Our new apartment would have to be cheap, walking distance to one of our jobs and have some architectural character, a precious commodity in these parts. Luckily, it didn’t take us long to find what we wanted.

It's the one on the bottom.

We first saw this flat advertised on the Internet. Oftentimes, realtors will post photographs that intentionally make a place look better, so Jacquie and I were pretty skeptical at first.

Later, we went to a real estate agent. Before we got a chance to tell him what wanted, he said, “I have just the place for you.”Again, we were skeptical.

But I’ll say this. Real estate agents in New Zealand are pretty sharp. They take one look at you and, bang, right off the bat they know exactly where you fit in the relative scheme of things. And wouldn’t you know it, he took us to the very same apartment we’d seen advertised on the Web. It was kismet. 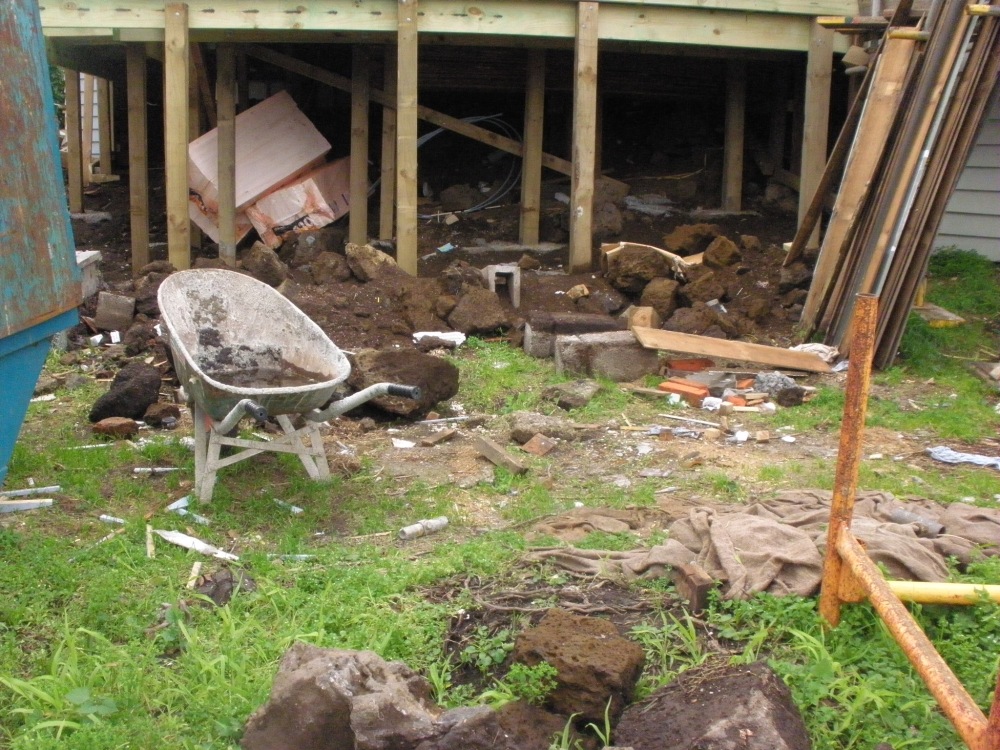 We fell in love with the flat once we saw the dusty old wheelbarrow filled with week-old standing water. "Just think of all the things we can do with that dirt," Jacquie said. Already, her designer's imagination raced into overdrive. "Our late 19th century Japanese military campaign chest will sit handsomely back there next to that coil of stainless steel flexible electrical conduit." Jacquie's instincts for color, composition and texture once again elicited my admiration, to say nothing of my envy. We signed the lease that very moment.

We really didn’t want any trouble. When you’re in your 20s and you move to a new apartment, you don’t hire professionals. You get your friends to do it. You say, “Hey, come help me move and I’ll buy you pizza and beer.” There’s always one friend who knows how to do things and seems to take authentic pleasure in the logistics and management of a move, while the three to five others that tag along are really just doing it because they hope you’ll owe them one when their turn comes around. Then when everything’s shifted, you take your friends out to eat and you get them so tanked that they end up splitting the bill in the end anyway.

This method might be appropriate when you’ve just graduated from college. But after 15 to 20 years, you kind of grow out of doing things that way, mostly because by the time you hit 40 you don’t have any friends left and you’re kind of forced to hire movers anyway. This is what most people refer to as “maturity”.

Moving day is always a drag. Not only is there stuff to carry and clean, but it's easy to forget important things when you're shifting flats. That's why we decided to throw all our possessions, including rubbish from the old place, into one convenient bin. After the guys we hired to push the bin to our new house left in the ambulance, we dove right in, selected the stuff we wanted to keep, and left the rest in the bin for somebody else to take of. Who said moving has to be difficult? I'm sure eventually one of our neighbors will get so sick of the bin, they'll have to complain to the Auckland City Council because, hey, who wants to live next to garbage? Not me. If there's a petition to get the government to remove that thing, my name will be at the top.

We had to do a lot of cleaning, both at the old flat, deep in the mildew forests of Mt Eden’s sub-alpine northwestern slopes, and at the new place, the exact location of which will remain undisclosed indefinitely due to the criminal element that makes up the majority of my readership.

In any case, cleaning both apartments sent latent particles into the air that triggered my allergies. I sneezed for three days straight.

The people at work wondered if this were finally the grounds for my dismissal they’d been praying for since I was hired. Their attitude toward me evoked the memory of one of my first jobs. I was a gallery assistant in a mediocre decorative painting space. We had an important exhibition. When the exhibition closed and those paintings that weren’t sold were sent back to the artist, it was my job to wrap everything in bubble wrap. Including the paintings, as I discovered later when my boss came in to check on my progress. I was able to secure bubble wrap around one painting, but my enthusiasm had gotten the best of me and I managed to wrap several other things with the painting underneath the bubble wrap, including a stapler, a telephone and half a burrito I couldn’t finish at lunch. My boss stood in silent horror looking at the work I had done so far.

“What are you, retarded?” she said.

Needless to say, I was flummoxed by her insult. On the one hand, there was no doubt that when it came to bubble wrapping things, I was indeed “retarded”. But from a strictly clinical perspective, her point was quite open to debate.

However, so taken by surprise was I that I let the matter drop, and continued to bubble wrap the gallery owner.

The point is that Jacquie and I performed what seemed like the labors of Hercules until our new flat was in order.

We were able to relax finally. I could watch movies again. There was one video I rented called  One Day in September a riveting documentary about the 1972 Munich Olympics. My brother in law told me it would be “grim”. But I didn’t know how grim until I watched it for myself. What a terrible, evil tragedy. I mean, the USSR beating the USA at basketball? A national disaster.

Archway to the breakfast nook.

The view I see every day, just before I rifle through Jacquie's dresser drawers.

It’s Sunday morning early, 12:15, as I write this. Later today I will fly from Auckland to Los Angeles for a conference. Then next Sunday I will head to NYC. I hope to post another blog while I’m on the road. Aren’t you excited.