Boy, I sure have changed my mind about culture.

I didn’t get much culture in the neighborhood where I grew up in the Bronx.

There was one time. My neighbor had bitten my forearm.

It was my fault, really. I’d moved my hand too suddenly and too close to his mouth.

Anyway, he broke the skin and my mom had to drive me to Montefiore Medical Center, with my hand dangling off my forearm by a single tendon.

The ER nurse injected me with a bacterial toxoid to prevent tetanus, then scooted me on home.

Technically speaking, then, it is possible to benefit from culture in the Bronx.

The overwhelming memory I have of the Bronx, however, is not so optimistic. The Bronx was a giant, graffiti-covered subway train grinding along the elevated tracks above houses made of burned-out cars held together by dried dog shit.

And that was hoity-toity Riverdale.

People in such circumstances have inspired people like the Rockerfellars, Carnegies, and Michael Ovitz to subscribe to Noblesse Oblige: the bestowing of the fruits of private wealth upon the commonwealth to enrich and enlighten the public, by rubbing our faces in it.

Thanks to Noblesse Oblige, the Metropolitan Museum of Art in Manhattan offered free drawing classes to city high school students.

We sketched works in the collection. Culture was never so fun. The occasional tourist got a thrill from poking our foreheads, to see if we were animatronic.

It was mostly free. Once a month, the students were asked to wash various stains out of Michael Ovitz’s tighty whities, to our edification. We learned how to scrub that underwear down from a Hans Hoffman to an Agnes Martin.

Not many people can make that claim.

He even invited me downtown to see Billy Budd for my 18th birthday.

It would be my first opera, but the experience kind of dashed my expectations. The atmosphere was lively, but I couldn’t understand what everyone was doing on stage. Opera turned out to be very confusing, and it made me think culture might be too complicated for me to acquire.

A few months later, I figured out that my teacher hadn’t taken me to Lincoln Center at all, but a place called Uncle Charley’s for a drag queen cabaret, which included my teacher’s friend, who went by Billy-Jean Budd.

True, there really isn’t much of a difference between drag queen cabaret and opera. But the experience put me off western orchestral composition completely.

Until Thursday, when Jacquie and I got to watch the Auckland Philharmonia Orchestra perform.

We were strolling along Queen Street Thursday evening, looking for something to do.

As we passed the crowd heading into Town Hall for the APO’s final performance of the season, a well-dressed matron of the arts collapsed right there in front of us.

Jacquie, being a nurse, started to walk faster.

But I noticed that while everyone was giving this lady mouth-to-mouth, or whatever, nobody spotted the ticket that had slipped out of her hand.

“But what about me?” Jacquie said, as I headed in to find the lady’s seat.

As there was still 15 minutes before the concert, chances were we’d find another ticket.

Sure enough, right at that moment, another well-dressed matron of the arts collapsed.

Coincidentally, the two matrons must have known each other, because their seats were together.

As they EMTs wheeled them into the ambulance, we waved goodbye as a show of our gratitude.

And we still had enough time to get plastered before the show. 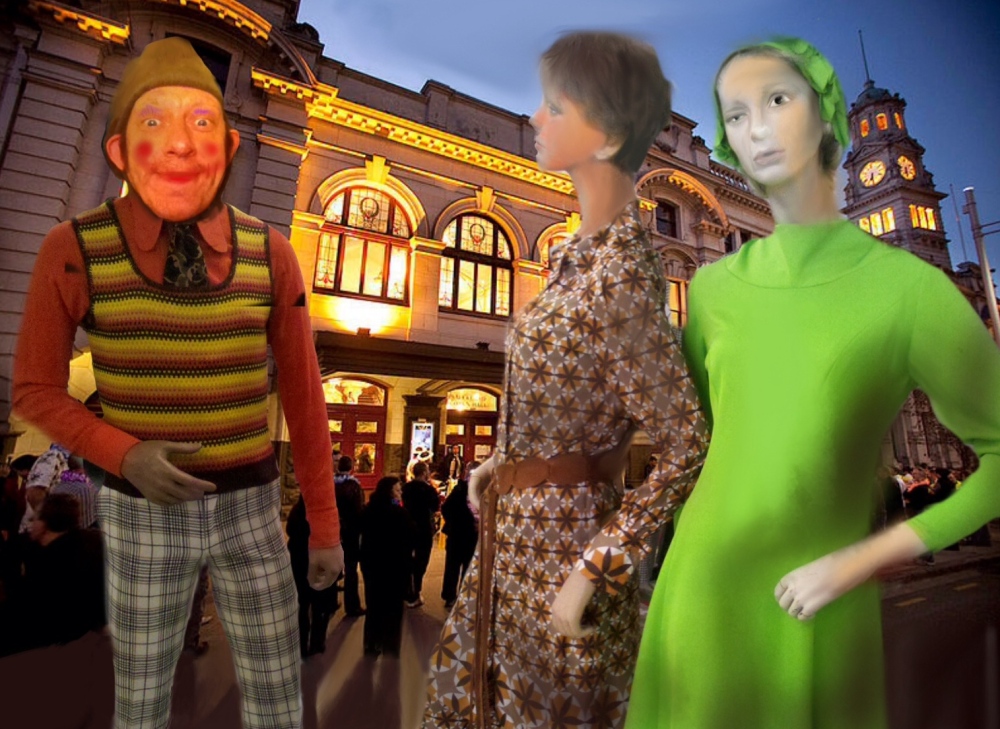 The show really blew us away, especially the APO’s rendition of Stravinsky’s The Rite of Spring.

It was, and I’m not kidding, a thrill. When you hear something like that performed live, you realize what is missing from the recording you have heard is the physicality of the performance.

It’s a jagged, forceful, peripatetic work. It has been ripped off by every Hollywood composer ever tasked with building suspense into a score.

They also played Schoenberg’s Verklärte Nacht, which I happened to be listening to in the car earlier that day.

And Night in the Gardens of Spain, an orchestral piece featuring Steven Osborne on Piano, by a Spanish composer I didn’t know, De Falla.

De Falla provided an interesting juxtaposition to Stravinsky, whose Rite of Spring made its infamous debut in Paris in 1913. If Stravinsky’s jagged edges anticipated the war that everyone knew was coming, De Falla was already pining for the old days when he finished the sentimental Night in the Gardens… in 1915, a year after the slaughter had begun.

I never would have thought about this stuff if those two elderly matrons of the arts hadn’t suffered cardiac events.

They didn’t get to see the show, but at least they got to spend time together in the ambulance.

Right after Night in the Gardens, the audience gave Steven Osborne a long and well-deserved round of applause.

Then, somewhat unexpectedly, a well dressed matron of the arts entered the stage to present Osborne with a huge bouquet.

It was fun to watch him being rewarded for a good job. The woman gave Osborne a kiss on the cheek and he accepted the bouquet and she walked off stage.

At this point, I’m kind of ready to stop clapping and get on with my life.

But everybody else kept going, as a new woman came out to deliver another bouquet with a kiss on the cheek.

The second woman left and we clapped some more and then two woman came out wheeling a service cart with a large covered platter on top of it.

They rolled the cart right in front of Osborne and lifted the cover to reveal a roast boar, which made Osborne laugh as he started to eat it.

So they kissed Osborne on the mouth, and left, and we clapped some more until we heard this very loud car engine from the back of the house.

We all turned to look as this monster truck came roaring down the center aisle, driven by an albino man in a leopard skin costume with a trained tiger riding shotgun.

Osborne, elbow deep in boar, was delighted, and laughed heartily as the albino drove the monster truck over the piano back and forth a dozen times until the instrument was completely flat.

Then the albino leaped out of the truck, along with the tiger, and they both proceeded to lick Osborne’s face, to the delight of some of the younger people in the audience.

The albino gave the pianist a set of keys, then trotted with his tiger back up the center aisle and out into a waiting taxi we could all see through a monster truck shaped hole where the doors used to be.

And on and on.

So, yeah, despite that little awkwardness, Jacquie and I are thinking we might subscribe to APO’s 2014 season.

Which I think would make my art teacher proud.

If nothing else, I can at least incorporate my rekindled love of culture in some kind of writing project.