I had the accidental pleasure of going to the Bath Street Gallery last Thursday night, as I passed on the way home from the dairy*.

The show runs through August 11, so make time to see it. 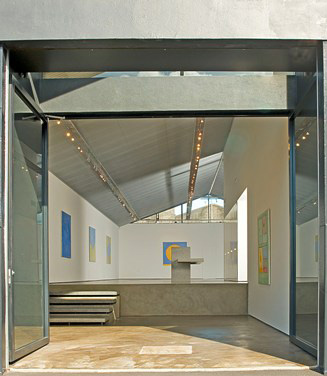 Before getting into why, I should first make some comments about Auckland and culture.

For months I had avoided entering the Bath Street Gallery for months, despite living two minutes away from the place. The work, to be general yet frank, didn’t rise above its locality. After my first visit, I would pass, but not go inside.

This could very well have been a function of my cultural New York City-bias. Jacquie accuses me of being such a snob, I dismiss out of hand the possibility that New Zealand could produce interesting art. A couple of weeks ago, she rented a documentary about Colin McMahon. She took it as a wholesale indictment of New Zealand culture when I left the room a few minutes after the film started, to pluck the hair out of my ear lobes and shoulders.

She thought I should accord McMahon respect for overcoming a provincialism all Kiwi artists must confront. I only partly agreed with this. Travel agencies had recently advertised weekend packages to Melbourne built around the chance to see the musical adaptation of An Officer and a Gentleman. So, clearly, there is an uphill battle going on here. But it seemed to Jacquie that I was painting with too broad a brush. This may be an island-culture on the frontier of the Anglophone world, but everyone that Jacquie counts as a friend or loved one, she said, would rather eat their own head than to see a musical adaptation of An Officer and a Gentleman.

When Jacquie could see that I wasn’t being won over to McMahon’s side, she was ready to concede something.

“Yes, it’s true he had a terrible drinking problem,” she said. “But he still did some great work.”

All artists have terrible drinking problems. And in America, at least before the 1970s and excepting the Depression, artists also faced a long history of resistance from the greater culture. So, why should I give McMahon a special dispensation?

The work in Selective Memories strikes you at first glance as dealing head-on with formal issues, without letting academic preoccupations suck the joy from their aesthetics. Simon Ogden’s 47 small linoleum on plywood point toward the portability of migration art, altar pieces, Orthodox Icons, then hang a left turn where figure meets ground. His color choices give an electric hum to imbue a bird-figure with the suggestion of a deity, or an organelle-like structure the hint of native intelligence.

There’s a little bit of Matisse, Philip Guston, and in his bigger works, Roberto Matta.

I had no idea if what I was thinking about the work at the opening made any sense. Was it grandiose to say to myself this show had restored my faith in art? Were my observations of the artists’ balancing act of form and content anything but obvious? Was I having a moment of profound insight? I was actually scared. A gallery assistant saw me standing there, frightened and disoriented like an octogenarian who forgets where he put his teeth. The assistant asked me if I wanted a glass of wine.

I was that insecure. But the fact remained, if it came from an acid flashback, or an epiphany, or whatever else you want to call it, something about this show had instantly resonated with me. Which seemed too good to be true.

So I left the gallery with the existential fear that I had been so long alienated from the art world, I no longer understood its language (assuming I ever did), to the point that my interpretation of the art was off the mark, shopworn or (god help me) middle class.

So I decided to return on Saturday morning to see whether my thoughts had any art world currency. In May, 2013, it will be 20 years since I graduated from Cooper Union, a competitively selective program that offered a respectable art education, absolutely free. (Free tuition has been under threat recently). Many graduates go on to have art careers, but the most prominent person from my year is, by far, the television and movie director, Patty Jenkins, who reminded me at the time I first met her of my older sister because of their shared intolerance of bullshit.

Intermittently over the years, I’ve felt a pang of guilt for not having built a career on what I did at Cooper, thinking perhaps someone else could have used the education to greater effect. But regret and guilt are boring.

It was nice to have these feelings, in light of my history, ratified by the gallery assistant. Hugo I think is his name. (Sorry if I got that wrong and you’re reading this). He echoed some of my thoughts about the work. We talked about how Bronwyn Taylor’s drawings, their deceptively simple approach to a sometimes neglected medium, making it more than a sketch, without having to be epic and melodramatic, like some of Ed Ruscha’s drawings seem to be.

Her drawing makes process as important as line, and while this is anything but novel, Taylor makes it seem fun. It’s a caprice that is always under her control.

Which is similar to the feeling I had looking at Bianca Van Leeuwen’s pinhole images on liquid light. The expressionist gesture that applied the photosensitive liquid crystallizes the potential for speed and motion, across a plain or down a road. 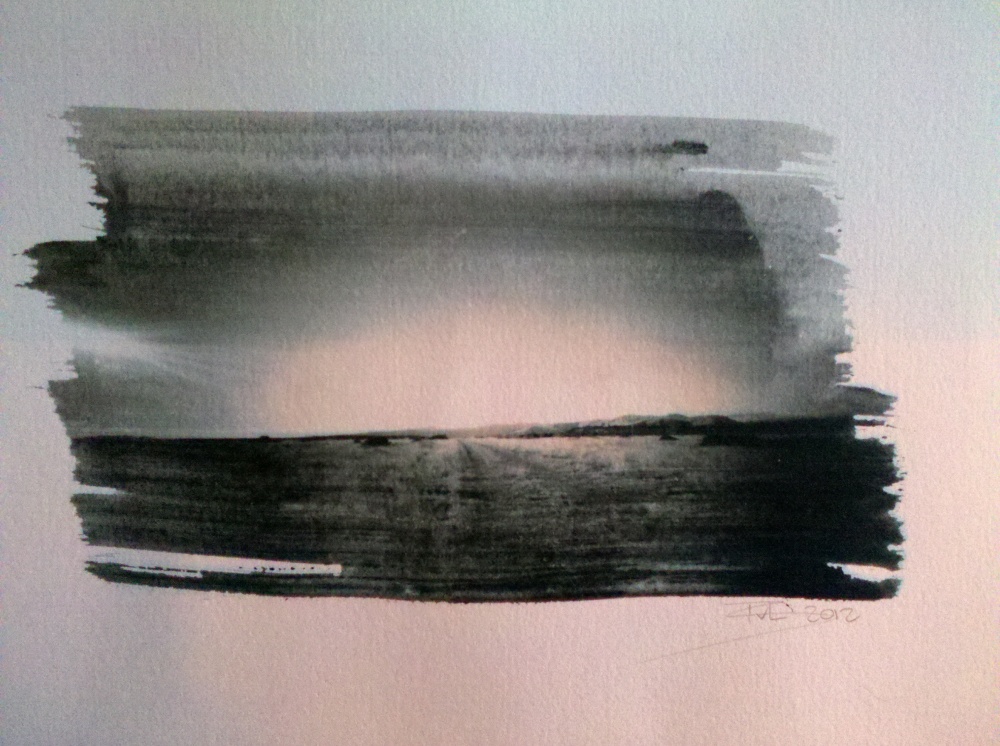 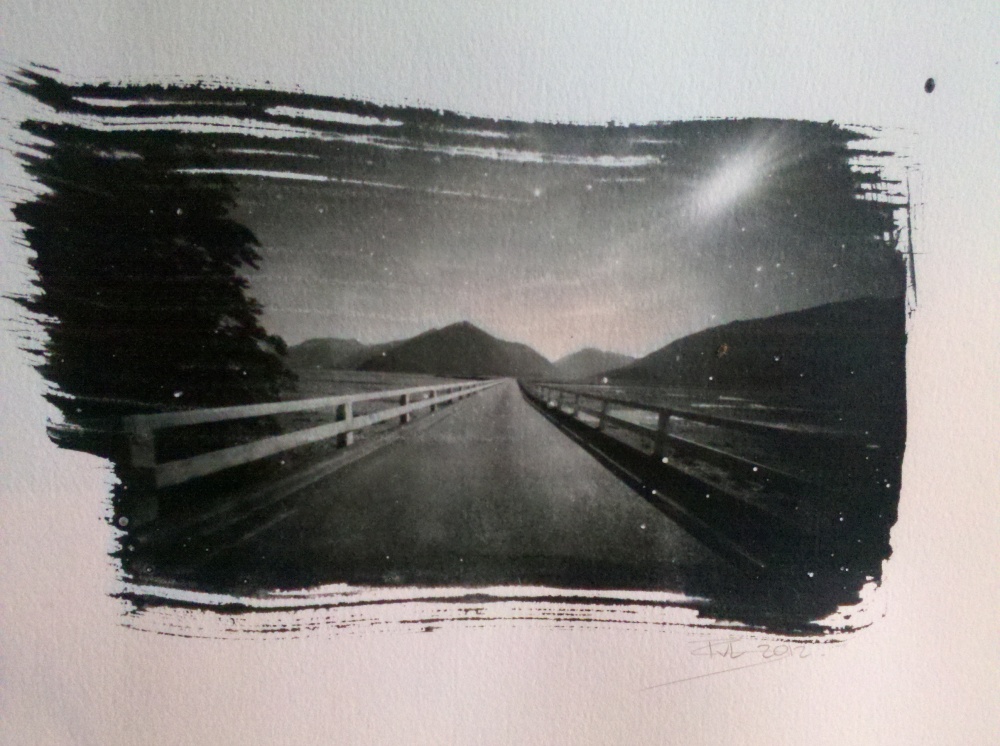 The anticipation of movement, however, is contradicted by image of the unused road. Nobody is going to be driving by for a while.

Anyway, regardless of whether this is all bullshit or not, pretentious or not, connected to the art world or not, overcompensation for possible alternate realities or not, it was refreshing to be able to go into a place where remarkable things were on display, to let them stimulate your thoughts, to share those thoughts with someone else, and if it fit with an orthodoxy provincial to New Zealand or to New York City in its own globalized and hip artists’ meat market kind of way.

And it was good for me to talk to Hugo again, because the last time I’d seen him, I was pretty cynical about anything to do with art. I guess I’m not so much right now.

*Note to Americans: New Zealanders call a bodega-like, minimart grocery store, “the dairy”. Don’t ask me why. You never see a cow in any of them. But it’s possible that, as with tobacco product, livestock is by law required to be kept hidden away from the customers’ view.