Every morning I ask myself, “Am I awake, or am I stuck in one of my recurring nightmares?”

Nor am I talking about the ones where I look out my window and it’s Auckland.

No, what I’m talking about is, of course, the Royal Birthing, and the fact that I even know about it.

I swear, news of this shit is being transmitted into our brains via satellite, continuously. You’d have to live in that bunker from Lost, and also be completely retarded, like most of the characters in Lost, to be ignorant of the fact that a likely future king of England was born this week. And even then, you probably had a gut instinct. Because it’s a fucked up crazy island. OK, maybe Lost was a bad example. But you get the picture.

Because you’ve been living the nightmare, too. Today we all thrilled over the baby’s first photo-op with the parents.

Judging by some of the pictures, Kate Middleton seems to have already gone to work on baby number two. Or maybe that’s just pregnancy fat. Whatever it is, one hopes the Duchess will remember to put on spanx before her next public appearance. I mean, just the spanx. No top. Whilst nursing.

Anyway, in case you were one of the characters from Lost, here is a picture of the young family at the public debut, right after the public burping and spanking of Prince William, but just before the bris.

Hermits, I give you the Duchess of Cambridge, a baby–which currently goes by the name NO FRILLS–and a balding man. 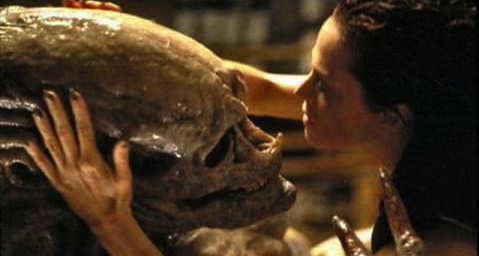 I’ve tried to ignore the hyperventilated media coverage of the Duchess of Cambridge. The wedding. The pregnancy. The identity of the real father.

But, this topic is hard to avoid, man. It’s like the world has been taken over by extraterrestrial pod-people and I’m the last real human, because I’m the only one left that doesn’t give a shit about Kate Middleton’s foo foo or the thing that is scheduled to pop out of it shortly.

Don’t get me wrong. I enjoy the occasional musing over adult female genitalia as much as the next lesbian, or heterosexual male.

What I don’t understand is why so many everyday people care what enters or exits this particular no-no zone.

Is it really huge? Will they be measuring the dilation in meters? Were its contractions somehow connected to the spate of earthquakes in New Zealand the other day?

Or is it the birthing process that intrigues people? You can go to any old dairy farm to watch a calving. You could probably even perform the insemination, if you paid the farmer enough.

But you don’t see a lot people going out of their way to ogle cows dropping placentas. Because that’s kind of gross.

Nor do you see Kate Middleton’s family letting any old guy off the street come into the house to inseminate her for a small fee.  Because Kate Middleton is considered oh so special.

Is the fascination all because of the royal thing? I’m willing to entertain the idea that royal reproduction differs from human reproduction. In fact, if I knew that the blessed day would involve, say, the baby violently bursting from its host’s abdomen, I’d be obsessed over it, too.

I know. Not likely.

So, maybe the baby is something special, not the mother? Help me out here. Is this child expected to start talking as soon as the royal meat curtains are parted? Even before the Royal Tasters can lick the afterbirth from its skin? (ie, “Hey, you missed some.”)

Will it be able to control people with its telekinetic powers?

That would be cool. But also, not very likely. In fact, it wouldn’t surprise me if this baby didn’t even know how to wipe its own ass when it was born. It probably won’t ever have to, just like Justin Bieber.

At least that’s what we’re told by the media.

We have been deluged by the media with this stupid pregnancy. And a lot of people around the world are eating it up.

Paparazzi, pensioners and other social leeches have been camped for weeks outside the hospital where the Duchess was to spawn.

They are making this into a tawdry spectacle.

Frankly, I find the whole the spectator aspect tasteless.

I mean, look at this guy.

Out of the way, you arse. You’re blocking our shot.

And whatever the media points to, the mindless hordes consume, without question.

For example, several stories about how the Middletons didn’t want to know the baby’s gender  have come out, leading to all kinds of speculation on social media.

Come on, people. Think. This baby is special. It’s not limited to one gender. If it wants to keep both genders for a while, and decide later, that’s its Royal prerogative.

Another outlet has gone so far as to predict that Prince William and the Duchess are going to be awesome parents. I really hope so. It’s very difficult balancing parenthood with doing fuck-all all day. It’s harder, still, when you’re living on a shoe-string budget of £36.1 million a year. And with all these austerity hawks running around the globe, I’d advise the Middletons to keep a low profile.

Why, just the other day, the New Zealand government cut benefits of 3000 people after it was discovered they were receiving money they were not entitled to.

I don’t know how the welfare system works in England. But if government officials there ever found out that the Middletons’ child was not ordained by god to be third in line to the throne, there could be some investigations. After all, the last thing any government wants to do in these dire economic times is give away public tax dollars to cheats that aren’t entitled to them.

Anyway, maybe the problem isn’t people who love the royal family. I come from America. The Founding Fathers there didn’t think that destiny of a people should rest in the hands of an elite, by some antiquated notion of the Divine Rights of the King.

The Founding Fathers knew that power should be shared universally. Among all white, gentile male, well-off merchants and plantation owners.

[[first draft, lightly proofed. I’m not getting paid for this, so sue me. Photo courtesy of Jeff Gaunt, taken at Comic Con in San Diego.]]