Earlier this month, the Internet shuddered at the news that Basement Life had received its 35,000th page view.

I know, right? Classic rags-to-riches tale. Like Horatio Alger, without the irritating lice-plagued newsies trying to impress everyone with their hustle-bustle.

That kind of in-your-face, sleeves-up initiative that Alger peddled makes everyone who reads him so nauseous that they vomit in their Barnes and Noble bags.

So, tell you what, my fine, ambitious guttersnipe: get with the times, get to the fat fryer, and get me my happy meal before I gouge out your eyes with a frozen chicken nugget.

Sorry. As you can plainly see, all this blog business has elevated my mood slightly.

I mean, it’s not every day you find out that it has taken you three years to get people to read your work, for free, 35,000 times. Sure, most of them came to the website by deceit, the biggest one being that “Justin Bieber Naked” tag I put on every new post.

Now, it doesn’t bother me if you people want to see Justin Bieber Naked pictures, be you a 13-year-old girl, or a 41 year-old-man. And it doesn’t even bother me that adolescent girls and middle-aged gay men share the same taste in pop stars.

But I can’t live with the fact that I have duped you people on so many occasions. Truth be told, there never were any pictures of Justin Bieber Naked to be found anywhere on Basement Life. And I knew. I let it happen. I know how frustrating it can be when the web page you find has nothing to do with what you really wanted, and you already have your pants down. Believe me, friend, I’ve been there. So I’m sorry that I put you through this. And I’m especially sorry to the return visitors who faithfully stopped by everyday, in the hope that I might have changed my mind and posted a Naked Justin Bieber picture, after all.

It was the life. I got carried away. I’m not making excuses, but you have to understand, I was raised from a very young child to be one thing: the world’s most famous blogger. When I started out three years ago, I would have done anything—anyyyyythiiiiing—to wrack up 35,000 page views in three years, the internet equivalent to “going platinum”.

Someone posted this Don DeLillo quote on Facebook recently. A writer takes earnest measures to secure his solitude and then finds endless ways to squander it. If getting 35,000 visits to a website on the false pretense of viewing an image of Justin Bieber isn’t quintessentially “squandering”, then I don’t know what is. That is to say, I guess I’m just a writer, I suppose.

A Review of the Future

when a superior intelligence will dominate and life will take on an altered form that we can’t predict or comprehend in our current, limited state.

…(when) human beings and machines will so effortlessly and elegantly merge that poor health, the ravages of old age and even death itself will all be things of the past.

The apparent contradiction that life in the Singularity is unpredictable yet it will surely improve the lot of humanity doesn’t evoke much cognitive dissonance among its zealous popularizers, like inventor/businessman Ray Kurzweil who seems to believe the application of science is always good, not the mixed-bag it really tends to be.

For example, one can argue that advances in medical and agricultural science have dramatically reduced suffering associated with starvation and illness. That’s good. One could also say that healthier people living longer thanks to better nutrition and medicine has contributed to overpopulation with all its attendant conflicts for finite resources and apparent irreconcilable differences with the environment. That one’s not so good. See? Mixed-bag.

So people who believe in the advent of a super-intelligence that will sweep away such complications ignore history, or maybe they assume that history doesn’t apply to them.

The latter possibility vexes me. The Times reports that Singularity University charges $15,000 for a nine-day course that “focuses on introducing entrepreneurs to promising technologies.” I don’t have a problem with elites charging other elites lots of money to develop new markets for innovative tchotchkes. But that high tuition made me wonder: how much am I going to have to shell out to get in on this Singularity action?

And will it even be worth it? Like, what if the Singularity comes up with a way of converting our consciousness into data and uploading that data onto some kind of gigantic iPod, except it’s called an iBod to avoid copyright infringement and instead of us carrying an iPod, the iBod will be carrying us?

And say the Singularity forgets to make the battery on this iBod very durable so that after a year or two, the whole iBod is fried? What happens to us? Do we die? If so, do we at least get a refund?

And what if our iBod dies after we’ve synced it up to our computers, which version of us will be us: the one that fried on the iBod or the one on your “Favorites” list on your computer that you like to play when you have people over for drinks?

And what if only the very smart and very rich are able to upload themselves onto their own fancy expensive iBods? What is everyone else supposed to do then? With my brains, wealth and charm, I’d be lucky to get one-week summer-share on a Commodore 64.

As you can see if you’ve bothered reading this far, and I really don’t know why you would, that Times article had me quite worried. I wanted to evolve to the Singularity, but I wasn’t sure if I had enough money. There was only a couple dollar in my pocket. Perhaps if I made myself as smart as Ray Kurzweil, I would be allowed to progress to the Singularity. I had to go out and learn something.

That’s when Jacquie and I decided to visit Highwic, a historic site and one of New Zealand’s finest Gothic timber houses. This place was a real test of our cognitive abilities with lots of sly puzzles for us to solve.

For example, just beyond the cashier as you enter the house, you come across a table, a kind of tiny gift shop, part of which looked like this:

We almost passed this table without noticing the problem.

“That has to be the answer.”

I was so excited I told the cashier who was markedly less impressed than I had been. She stared at me.

“It’s ok if you don’t understand,” I said. “Not everybody can progress to the Singularity.”

“Hey, I know where we can learn stuff,” Jacquie said. “Let’s go to the toilet.”

So we went to the toilet. We spent a lot of time there. Then we saw this sign posted on the actual toilet itself. 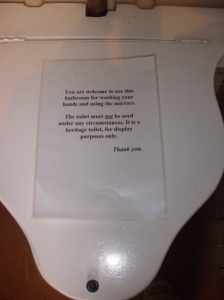 The sign says: You are welcome to use this bathroom for washing your hands and using the mirrors. The toilet must not be used under any circumstances. It is a heritage toilet, for display purposes only. Thank You

We were so proud of ourselves because even though we didn’t see the sign until later, we hadn’t used the heritage toilet anyway. We figured it out on our own.

What we had more trouble figuring out though was how to work the heritage enema. 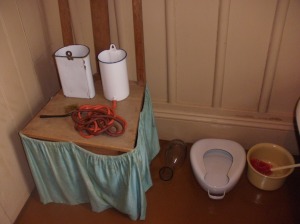 I hope there won't be any heritage enemas in the Singularity because no matter how hard I tried, I just couldn't figure out how to use it. The bedpan, however, was a cinch.

At that point we decided to quit while we were ahead. We’d learned enough for one day. The future was still far off into the future, so there’d plenty more days to figure out how to use the heritage enema. In the meantime, we decided to enjoy the rest of Highwic.

Highwic was founded in 1862 as a private residence for Alfred Buckland, who started off as a farmer and rose the ranks of Pakeha society to become an even wealthier farmer. He had 21 children with two successive wives. The house stayed in the family until 1978 and the family stayed in the house until later that same year.

The doll house included an exact replica of the heritage bathroom.

We were pooped by the end of our tour. The future was looking good. Our brains were brimming with lots of information. Highwic even inspired us with an idea to make our flat as homey as the one Alfred Buckland lived in.