I hate my upstairs neighbor. He thinks he’s so cool. Just because he’s a Morris Dancer. He’s always throwing it in my face. Hitting my face with his ankle bells and handkerchiefs, driving around my face in his 2002 Honda Civic hatchback. Show-off.

His name is Dabney. He’s a defense contractor. Dabney’s job is to toughen-up recruit-training through the pageantry of Morris Dancing.

A New Zealand Special Forces Morris Dancer trains his entire life for this moment. No Morris Dancer would go into battle without his stick and bell-pads.

What a jerk. His whole family is a bunch of jerks. They’re very noisy. His wife Daphne gets her exercise by going up and down the stairs late every night. I wouldn’t mind it so much, but the sound of her hoofs clopping on the wood makes it difficult for me to fall asleep.

Their daughter is loud too. Polly-Anastasia studies music at University, according to some of her mail I’ve been opening. She’s been practicing day and night for a big audition. I’m no Broadway expert, but judging by the sound of Polly’s voice, I think she’s going out for a part in Bronchitis, The Musical. If there is such a thing. Otherwise, it’s probably an adaptation of The Lion King, but instead of Africa, it’s set in the Everglades and features a herd of echolocating manatees.

But the thing I hate most about Dabney is his annoying friendliness. Like, Jacquie and I hadn’t lived in New Zealand for two seconds before he got all up in our shit introducing himself. He even tried to get us to join the local Welsh Choir. “Don’t worry,” he said. “Only 40 percent of the songs are in Welsh.”

Why in hell would we want to do that? In the first place, everyone knows that Welsh is a made-up language. How about I throw a bunch of silverware on the floor and call that a language? Same difference. And secondly, when a friend of one of Jacquie’s friends found out that I was considering taking Dabney up on his offer, she pooh-poohed the idea. She said that people who join choirs were “the biggest douchebags in the world.” That settled it. There was no way that I was going to socialize and be stimulated by a novel experience if that meant incurring the casual disparagement of a complete stranger.

And the more I thought about what the stranger said, the more it made sense. Dabney wasn’t even from Wales. Just what kind of non-Welsh douchebag joins a Welsh choir? Then I realized the answer: a Morris Dancer. That’s who.

Recently, this douchebag gave me one more reason to hate him. One day I came home from shopping for breakfast stuff at the supermarket, my arms filled with potato chips and vodka. There was Dabney, working on one of his Morris Dances. He was so excited, he insisted on teaching me the moves. The routine involved us taking turns hitting each other over the head with aluminum beer trays. I have to admit, I found the experience so pleasurable that I actually started to think of Dabney as a person, and not as a douchebag. I even shook his hand.

Big mistake. Because a few days later, my hand broke out in mysterious, bulbous nodes, which Jacquie identified as “buboes.”

Thanks for the buboes, douchebag.

Well, that just tore me up. You act nice to a guy, indulge his passion for a 15th century dance form, and what does he do? He turns around and literally hands you a medieval plague. This called for immediate action. With the daily clopping, shrieking and jingling coming from upstairs, we had to fight back, fight fire with fire.

“Jacquie, we have to end our moratorium on farting.”

This was serious business. A few weeks before, Jacquie and I got into a huge fight. She was angry because I had allowed trichotillomania, an impulse control disorder, to ruin my life. The trichotillomaniac has the irresistible urge to pull out his body hair. Jacquie said that I did it too much and she wanted me to stop. But I said I only plucked my hair as a nervous response to Jacquie’s constant farting. She disagreed but we made a deal. If she could go for 72 hours and fart only in authorized areas, then I would stop plucking my hair out. And by God we did it. The apartment went quiet. Air smelled fresher, food tasted better, and for the first time in six years, I had eyebrows.

Until Dabney gave me buboes.

“I’m sorry, Jacquie. Ending the moratorium is the only way.”

“Does this mean that–”

So I began to pluck and we both farted as much as we could. 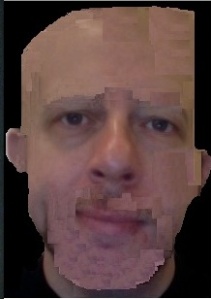 As a trichotillomaniac, I managed to pluck right down to my skull, which turned out to be more angular than I thought it was when I had hair.

But it worked. We won in the end. Ater a few weeks of plucking and farting, I went up to Dabney to show him my hairless head. We could hear Jacquie farting in the background. Tears came to our eyes. From the fumes. And Dabney began to cry and apologize for everything.

But I still have the buboes there to remind me of the war I fought, and won, against the Morris Dancing douchebag upstairs.

Sunshine on my buboes makes me happy.