This Thursday is Thanksgiving in America.

I know what some of you in the US are wondering and the answer is ‘no’.  Thanksgiving is not celebrated in New Zealand.

This is for a very obvious reason that shouldn’t need mentioning: New Zealand isn’t thankful for anything.

The mindset here diverges from the Americans’, formed in parallel, colonial histories that intersect from time to time. 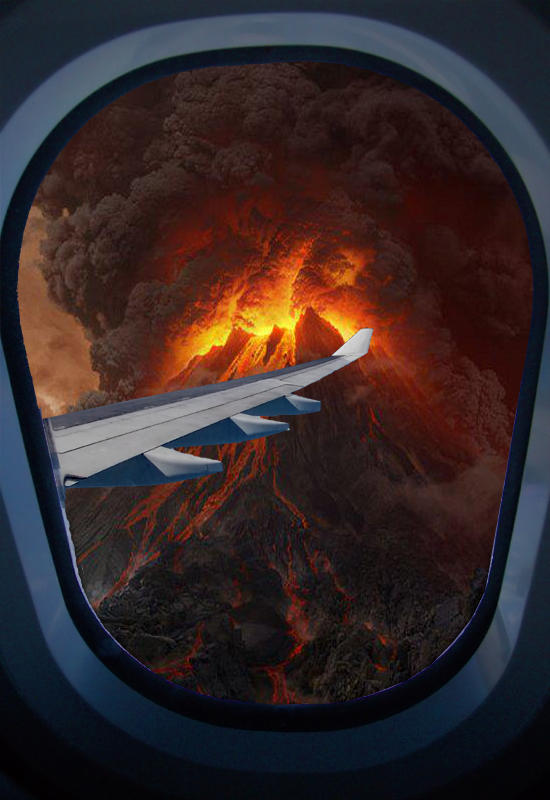 Mt. Tongariro erupted this afternoon at about 1:30, sending a plume of ash three or four kilometers into the troposphere. It was a brief and less dramatic explosion than one that occurred in August. There were 100 or so school kids hiking nearby, but I don’t think anyone was hurt. Mt. Tongariro served as the template for Mt. Doom in the Lord of the Rings movies. This image was lifted from Dan News (https://twitter.com/dannews).

The Europeans that settled New Zealand were just as unpleasant as those that settled the US. They were both kicked out of some of the same countries, even. And not without good reason. They were all ugly and they smelled like cow manure. But that’s where the similarities end.

Today, not only do Americans smell much better than New Zealanders, but they also come from a much different experience with indigenous people. The English in colonial Massachusetts were treated by the Native Americans to a huge Thanksgiving feast with all the trimmin’s (whatever the fuck that means). Then they all said a prayer, and lived happily ever after together in peace and harmony. Apart from that little misunderstanding over land and small pox-laden blankets. All water under the bridge. Your modern Indian today happily occupies crucial niches in American society, not just as the sporting team logos that grace our helmets, but as the custodians of our favorite vices tax-free.

Of course, the Maori-European experience was not so fortunate. Instead of James Cook and his crew being feted by the Maori in their first encounter, a handful of those European sailors were actually eaten instead. By the handful. (With the leftovers put away in the ice box and used for sandwiches for the kids to take to school).

You’d have to be a saint to show gratitude after traveling seven miles through someone’s intestines, only to be shat in a ditch (on Thanksgiving Day no less.) How is it even possible to turn the other cheek, after it has been braised, and dressed in a delicious mint sauce? Lick the other cheek, is more like it. So, I give Kiwis a pass for not celebrating Thanksgiving.

And I give the Maori a pass, too. I don’t blame them for eating a few poms now and then, back in the day. I do blame them for having eaten the wrong people.

You can’t go back in time and change history. But wouldn’t it be great if Peter Jackson’s ancestors had been eaten?

Better yet, could someone eat Peter Jackson now, tonight, while the authorities, I don’t know, looked the other way?

Peter Jackson and his movies have done great things for New Zealand. I guess. In essence, he accomplished what the US compulsory education system could never achieve. He has alerted Americans to the concept that there is some place that isn’t the United States. That is no minor feat.

But it only goes so far. Before I moved to New Zealand in 2009, there was a bit of a disagreement among my friends and family over where I was actually going, if it did indeed exist. Some said the east coast of Australia. Others said, “that island where they filmed Lost.” An old friend from college asked me if New Zealand was one of the flyover states.

At the airport, there was a suggestion to hold that year’s family Christmas celebration in a place equidistant from New York and New Zealand.

“Like, maybe somewhere on the New Jersey Turnpike,” they said.

Clearly, Peter Jackson has a job to finish. And he’s more than willing to take on the task, without complaint. And with the helpful hand of the New Zealand government, which has slavishly tailored tourism promotions into little more than Hobbit-abilia. This essentially makes Peter Jackson the biggest welfare queen in the country. There are also in-flight promotions on Air New Zealand. For at least a year, probably longer, Air New Zealand used a video featuring Richard Simmons in its pre-flight instructions videos. Now, of course, it’s hobbits and dwarves and other Irish folk.

After Peter Jackson decided to milk The Hobbit into a trilogy, after he blackmailed the government into changing labor laws or lose the production to Romania, after the allegations of animals dying by the dozen in hazardous pens, and after the “mysterious cover ups on autopsy reports”, I just think Peter Jackson needs to be eaten. Full stop.

So have yourself some Bath Salts, and sharpen your forks and knives. It’s Thanksgiving.

Editor’s Note: I can’t wait to see The Hobbit.